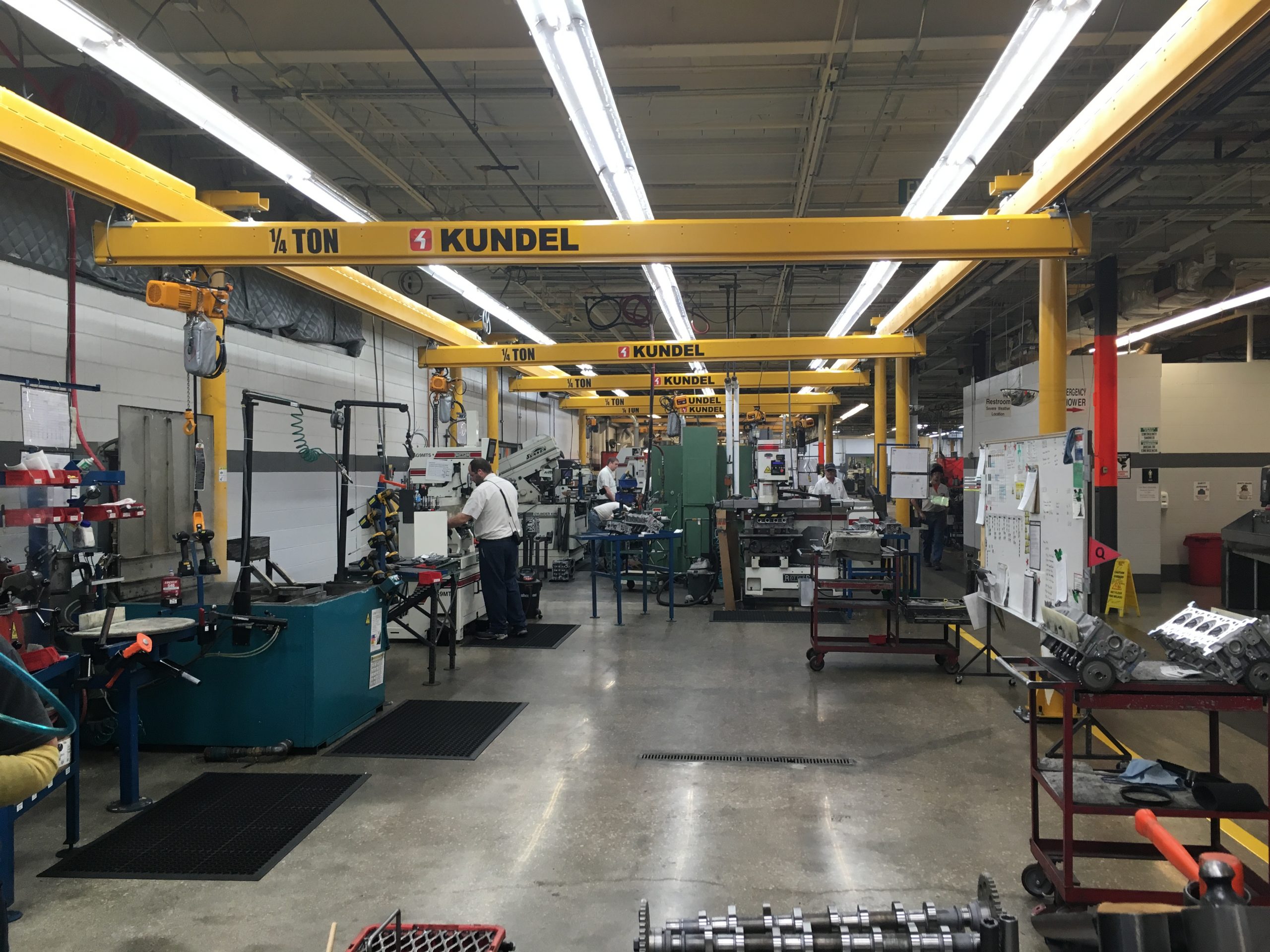 Excellence demands excellence. So, when the country’s premier engine remanufacturer wants the best crane systems for their factory, there was only one choice for them. Now with over 10,000 linear feet of Ktrac crane rail and countless SnapTrac crane systems in place, Jasper Engines & Transmissions is fully outfitted with Kundel products. When over half of all NASCAR teams run Jasper transmissions, you know they only want the best for their product.

The relationship between Kundel and Jasper started in 2014 with a simple 4 post, 27’ by 29’ twin bridge system. Cory Durcholz, plant manager said “Overall, we like the systems and Kade and I prefer them over other systems.” After that, it was decided that they wanted to replace every existing crane system throughout all their facilities with Kundel systems. In 2015 alone, Team Jasper purchased and installed 23 different Ktrac systems. Over 100 posts were set in place and their facility has never been more efficient. Their flagship system being a 101’ long system supported by 10 posts, sporting nine 17’ long bridges and yes, featuring our internal wireless electric bar.

We are now set to deliver their largest crane system since our relationship began. This one is 140’ long with a continuous runway on one side, and the other side broken into two sections requiring two different length bridges. Kundel’s engineering team and the design of our systems allow us to turn your problems into solutions. We can cover longer spans at higher capacities than anyone else in the industry and we are proud of it. Knowing our crane systems help keep Americans safe and efficient is what drives us to produce the best crane systems in America.

We all know LinkedIn is a great place to find a company's freshest content. This is where we showcase ours. You will find pics of our custom crane...

Kundel now has an exciting fresh new line of cotton T-shirts. These shirts run a size small so bear in mind when ordering from your rep. They retail...

Invest in Your Company and People

Trench boxes are for much more than the big jobs. Too many smaller contractors and plumbers feel trench safety equipment is overkill for the smaller...

Free is The Best Price

The ownership here at Kundel Industries truly believe that their calling was more than to build a successful company, but to use their talents and...

Overhead bridge cranes are essential tools for any warehouse or construction site where heavy loads must be moved regularly. Whether utilizing floor...

How Safe is a Five Foot Trench?

With todays push for jobs to be done faster and cheaper than the next bid, shortcuts are bound to be taken. Unfortunately, these shortcuts can...

How to Ensure Overhead and Gantry Crane Safety

The overhead and gantry are the two most common types of industrial cranes. The overhead crane has a movable bridge that carries a movable trolley...